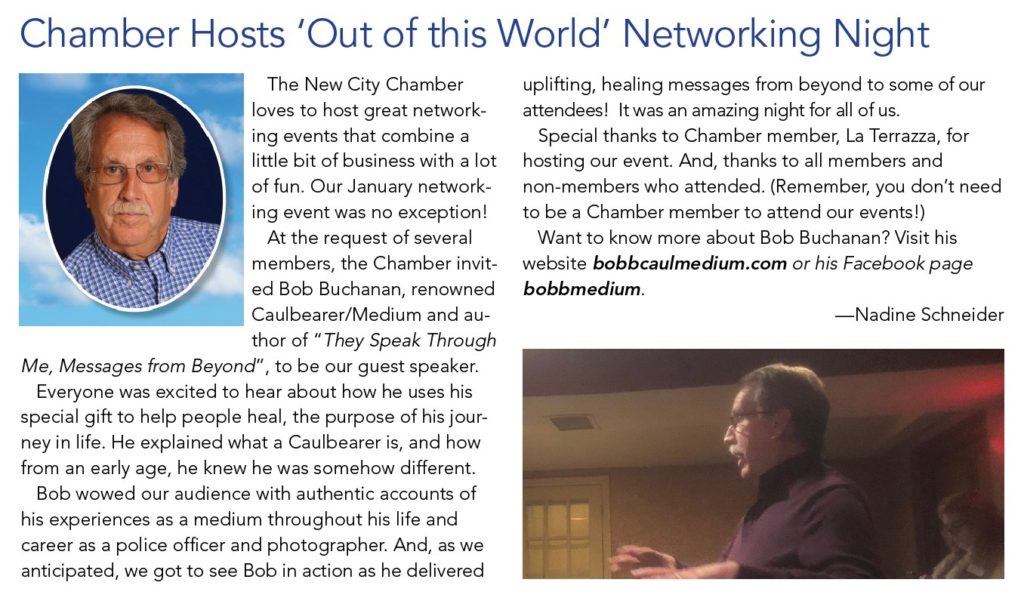 Bob Buchanan: Interview With A Caulbearer

Home Guru: A  Medium Does a ‘Reading’ of The Home Guru’s Home

Bob Buchanan, medium, left, in a trance-like state, in the kitchen of The Home Guru, “reading” the visiting spirits.

You’ve heard of mediums doing “readings” with people, like the Long Island Medium on TV, but did you know they can be done with houses too?

I had never considered the notion, but then I never knew that Bob Buchanan was a psychic medium. I had known him only as a professional photographer I’ve engaged in my public relations work.

Only recently did I learn about his second career when he volunteered for a charity event I’m doing with William Raveis Real Estate. He handed me two business cards, one saying “psychic medium.”

At first, I considered it amusing and smiled. But he looked at me very seriously and reported that, “Yes, I was born with a caul, a veil and I’ve known all my life that I’ve had psychic gifts, but I just kept them to myself until recently.”

“What changed?” I asked.

“A friend, another psychic, told me that I had to help other people, and it was time for me to do it,” Buchanan responded.

A short while later, I was speaking with him by phone and an idea popped into my head. I asked him if he ever did readings on houses. He said he never did, but he could, and he could do it telepathically, just as he does with people. He told me not to tell him anything about my house, but to just give him the address.

After a few moments of silence, he began speaking slowly in a monotone. “I see a two-story house and in a front room of the second story, there are noises that you can’t explain, right?” Good first guess, I thought.

For more than 40 years, my wife and I have enjoyed the sitting area of our oversized main bedroom of our early 18th century home. There is an original built-in cabinet next to the fireplace that produces a strange swooshing noise, and we have never figured out what causes it.

Then he said that on the north side of the house, he sees a one-story structure where a past owner had cut into people’s bodies. Without my having told him anything about the house, that far northwest corner is where the original saltbox wing of the house becomes one story, and while pure speculation, it might well have been the place that Ebenezer White, a physician and surgeon, had used as his operating room.

I have always been a skeptic about mediums, but judging from these two projections, I thought it warranted an invitation to Buchanan to come to the premises to experience the house in person. A couple of days later he arrived, and I invited my videographer to come along.

When the video was rolling, Buchanan introduced himself and explained how he worked, saying that his visions were revealed to him much like a black and white movie. Then he closed his eyes and started speaking again in a measured voice revealing many presences and their experiences in the house through the centuries that would require several columns to report.

At one point, suddenly, his eyes popped wide open and he proclaimed, questioning at the same time, “George Washington has been here? Yes, I see it in color! I am always certain when I see it in color!” Indeed, a descendent had told me that Washington had visited Dr. White in this house. Then, the skeptic in me thought, yes, but that might have been seen someplace online, because I have written about it several times.

But Buchanan shared something unreported that might make any skeptic wonder. More than 40 years ago when I had first moved into this house, I was visited by a 90-year-old woman named Elsie Curry, a descendant of Ebenezer White, who shared with me many memories of having visited my home as a child.

She brought photographs with her and one of them was of her sitting on the front porch at the turn of the last century with three other little girls. She pointed to one, a cousin who lived here, who she said was a tomboy and was killed when she was only seven by falling from a tall tree on the property.

Buchanan’s last revelation was that we were in the presence of a mischievous little girl who lost her life on the property by falling from a tall tree. I don’t recall ever having shared Elsie Curry’s story with anyone.

If you would like a reading for yourself or your house – or a really great photographic session–call Bob Buchanan at 914-879-1115. His website is BobBcaulMedium.com.

My radio interview with Fran Copa I am the 2nd interview;

Read some of my latest posts…